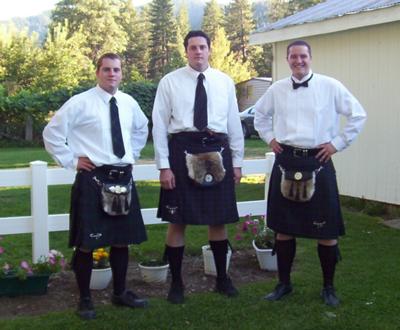 Both my husband and I have always had a special fondness for our Scottish heritage even though we can also claim German, Native American and others between the two of us. We are a musical family and tried to instill a love of many types of music in our six children but seemed to more often than now choose great Celtic music to listen to. My husband being a fiddler himself, we have worn out several records and cassettes of Scottish fiddlers.


When the first of our five sons chose a bride, he fell for a lovely Mexican American girl who happened to be an English major with a powerful draw to all legends and stories of a Celtic nature. Neither her family or ours had money for lavish weddings but knowing she had a bride's dream and desire for a Celtic flair to her special day I set out to see if there was any way possible for kilts at the wedding reception. I was pretty discouraged and disappointed but not surprised to find that good woolen kilts were way out of our budget.

Once and a while in our lives things just fall into place in the sweetest ways though. I have a friend who can sew anything and pretty much has as a hobby. She quickly volunteered to make the groom and his best man brother kilts. I found her a kilt pattern at the local department store in the costume patterns. Maybe it isn't quite the whole nine yards but it is fairly generous with the wool and if complicated makes the quilt. . . my seamstress friend says a Man's suit coat is a piece of cake compared to a kilt to sew. I had spent many sleepless nights wondering what to do for tartan as I had heard that it was a no no to wear the "wrong" one and didn't want to offend anyone. Silly considering the bride's family are Mexican and don't give a hoot and we live in such a tiny rural town no one had likely seen or heard of kilt etiquette. I called a famous North American woolen outlet place and they had just the right amount of Blackwatch on clearance. I figured I couldn't go wrong with that and my son had even said a green and navy plaid would be his choice. Providence and my seamstress smiled on us again when the oldest of my sons who is very bashful hinted that he would also like to wear a kilt. My friend said yes and material from an online fabric place showed up at a price we could afford.

Prince Charlie Jackets were out of the question and as the reception was outdoors in August we wished for something cooler and less formal anyway. Did you know that you can

purchase tuxedo shirts from restaurant supply places online sometimes inexpensively? They have colorful vests too though we didn't try that. The most likely belts around here are western style but we are among the very few in the area who are not really the cowboy type so opted for the widest men's belts we could find. I had great fun making sporrans. First I tried some fake fur and it was ok but then my seamstress/friend pulled out a few rabbit pelts she had in her crafting arsenal. Those and a nice black faux leather sewed up nicely on my machine and were trimmed with shells from the Pacific ocean and some gemstones from my favorite beading company and some tassels from that all American discount department store with sewing/craft section. The oldest son also embraces his Native American roots so his sporran got a slightly more native look. Crazy things were obsessed over for weeks and most obstacles were overcome at least happily enough for me. We found dog chain leashes and strap type leashes made fine sporran straps. Soccer/football socks were the only affordable ones long enough for my sons and the son who is 6'4" could have used longer socks. Homemade flashes from leftover fabric helped them look more authentic. One son made attractive Sgian Dubhs as knife making is his hobby. My biggest disappointment was kilt pins. I had to use the ones that look like diaper pins and decorate them with stones or Native American stuff but they are not the look we would prefer. If you look at the picture carefully you can see that my very left handed sewing expert had a little trouble laying the kilts out the correct direction. She had already had to rip the seams of the grooms kilt and do it again so there was no quibbling about the one going together backwards even if the ghosts of ancient Scots may haunt us forever.

All and all the kilts were loved by all and made the brides dreams come true for her special day. Her parents presented our son with sombrero and sarape and I gave her a plaid and brooch which made for interesting wedding pictures and a sweet little cultural exchange in the reception festivities.

Coming soon: The next son is marrying an Indonesian girl and he wants kilts too - the ones we have and three more for Dad and the other brothers! My husband is determined to have proper kilt hose if we have to knit them ourselves. Money is tighter than ever - cities and stores are far away - but my imagination is running wild! I invite your ideas though - anyone?

Since you found this page interesting, here are some more links to other pages of equal interest.

how to make a kilt